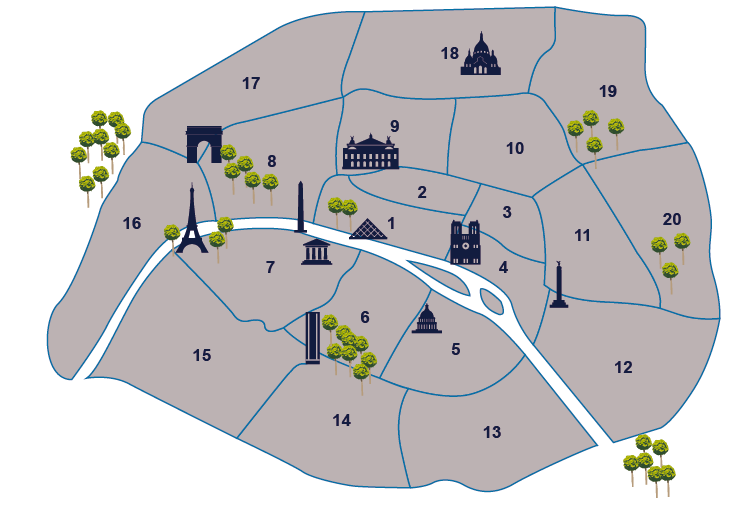 Must see in Paris:

Did you know that Paris is divided into 20 districts or arrondissements in each of which there are sights you can’t miss such as the Louvre, the Tuileries Gardens or the Royal Palace in the 1st district, Notre-Dame de Paris and the Ile Saint-Louis in the 4th, Saint Germain des Pres in the 6th or even Montmartre and the Basilica Sacre-Coeur in the 18th?

Other essentials in Paris: the Comedie Francaise, Place Vendome, the Conciergerie, Sainte Chapelle, the Forum Des Halles in the 1st; covered passages as the passage Vivienne and the Passage des Panoramas in the 2nd; the Marais and the Picasso museum in the 3rd; the Contre Pompidou and the Jewish quarter in the 4th; the Latin quarter, the Sorbonne, the arenas of Lutèce, the botanical garden and the Pantheon in the 5th; the Eiffel tower, Les Invalides, the Musee d’Orsay and the Pont Alexandre III in the 7th; the Champs Elysées, the Grand Palais, the Petit Palais and Place de la Concorde in the 8th; the Opera Garnier in the 9th; the Montparnasse Tower for its views in Paris the 15th; the Chaillot palace, Trocadero and the Guimet museum in the 16th.

If you really want step off the beaten path and discover the new Paris playing out in emerging neighborhoods, you should take the time to walk, stroll and visit places such as:

For more information, subscribe to our newsletter (launching in July 2016) where you will receive our latest discoveries and special offers.